The Mobile World Congress (organized by GSMA) is the world’s largest mobile trade show, with more than 100,000 participants from over 200 countries.

Two weeks before the event (12.02.2020), the organizers of MWC Barcelona 2020 made the decision to postpone the conference due to the Coronavirus outbreak. This gave them time to go into crisis mode and figure out a plan.

Acció - Catalonia Trade & Investment, the organizers of one of the MWC Networking Events, had already invested months of preparation and planning for their b2b matchmaking event. They now faced the question of how to proceed. Cancellation should be avoided if possible.

“We had to face a very difficult situation as the MWC was postponed with such short notice.” - Alba Quer (Tech cooperation project manager at Accio)

The Need for a Hybrid Event

The very first challenge Accio had to accomplish was to reassure the Innovation Hunters who would still like to attend. Those participants were essential for the success of the event, as they would attract other visitors to attend.

Accio contacted them just the next day, right after the MWC postponement was announced. Luckily, the majority of the Innovation Hunters were still happy to participate. From the initial 46, the attendance was reconfirmed at 30. So far, so good.

In the next step, all registered participants were contacted through b2match’s integrated emailing system. The participation of the Innovation Hunters was communicated and through a custom question, Accio asked for re-confirmation of participation.

The feedback showed the majority of registered participants were still holding onto their plans to show up at the event in Barcelona. However, a share of participants declined their physical attendance.

The normal approach, that participants get matched and meet in face-to-face meetings was not an option anymore.

The overall challenge was to find a solution that would allow every participant, even those not coming to Barcelona, to have 1-1 meetings.

The solution would need to allow the present participants to have their on-site meetings, but also allow those who could not travel to Barcelona to still be part of the b2b matchmaking event. Additionally, a new venue was needed.

In order to find a solution, Accio was in close contact with b2match.

“The b2match team was very helpful as we had to endure a new brokerage event strategy.” - Alba Quer

One part of the solution was to change the layout of the event.

The initially planned three days were split up. The physical event in Barcelona now was reduced to two days, where everyone showing up as planned could meet and experience the event. But in order to incorporate the participant group that did not reconfirm their attendance in Barcelona, another day was added (5th, March). This extra day was just for participants to have virtual meetings. In practice, most of the 1-1 meetings for the event had already been scheduled. The meetings among participants that came to Barcelona were rescheduled to take place during the two-day timeframe. Meetings with participants not coming to Barcelona were shifted to take place virtually. 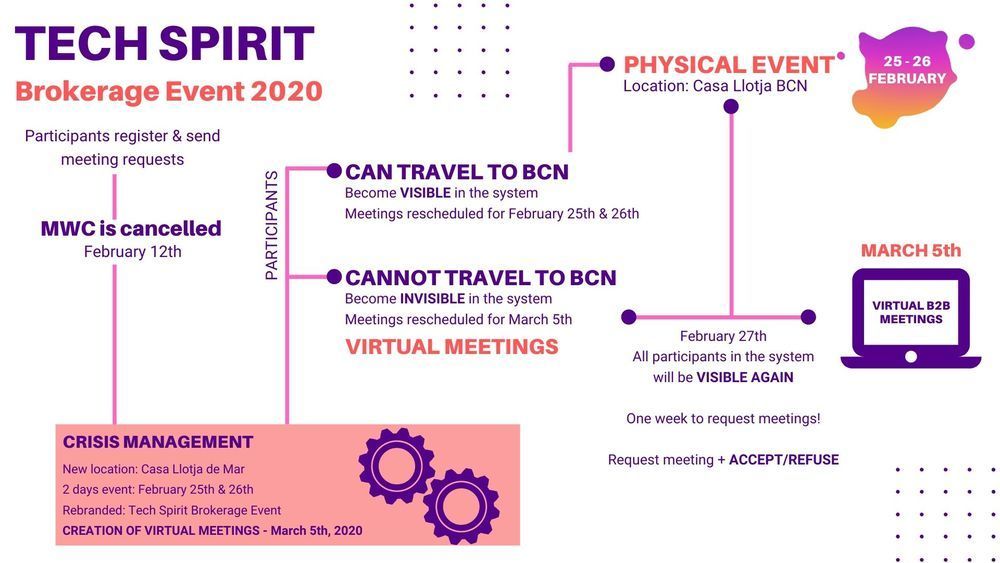 Now, the scheduled meetings between participants were not restricted to the location in Barcelona anymore.

It was decided that the physical event should take place as planned but in a different location. In order to give the participants more time to book virtual meetings, the organizers added an extra event day which was a week later. This additional day in the event agenda was solely dedicated to the virtual meetings.

The fast response of Accio, taking the right steps to ensure their event could take place, was key in facilitating this event’s outcome.

Also the close communication between Accio and b2match in finding a solution was essential for coming up with a proper solution.

“From the beginning, they proposed their support and were suggesting different options on how to deal with it. In addition, they also reacted quickly to our questions and demands which was crucial for us.” - Alba Quer

Taking into account the challenges, the event was a huge success.

As you can seen, pivoting to hybrid events translates beautifully for business matchmaking events.

ACCIÓ is the agency for business competitiveness of the Generalitat de Catalunya.

Inspired? Get in Touch and Let Us Help Make Your Next Event a Success.